You’ve probably heard about Margaret Alexander from us before during last year’s museum and online exhibit From Clearing to Cataloguing: The Corpus of Tunisian Mosaics, or from a more recent report on processing the materials in the Corpus des Mosaïques de Tunisie (CMT) and Margaret Alexander Collection. The conservation of Roman and Late Antique floor mosaics at the sites of Carthage, El Djem, Thuburbo Majus, and Utica was co-directed by Alexander — a project that lasted for roughly thirty years and resulted in a four-volume catalog. The physical fieldwork was supplemented with rigorous documentation of mosaic tesserae pattern details and larger pictorial imagery, including aerial views of room-size mosaics. Most of the photographic documentation was produced for the purpose of illustrating the CMT publications, and exists as both black-and-white negatives and color transparency sheet film. Additionally, there are over 9,000 mounted color slides mostly shot by Alexander and her husband, Robert L. Alexander. These slides not only document CMT fieldwork, but also mosaic pavements throughout 17 countries, drawn from the Alexanders’ travels and research over the years.

During a recent assessment of this large group  of slides, I was easily immersed in the beauty and order of the preserved mosaics themselves. I was also struck by how the occasional snapshot of a picturesque vista or bustling street scene opened a small window onto the vernacular environs, animals and flora, local people, historic monuments, and landscapes of North Africa that once graced so many early 20th century French travel posters. The road trips and excursions throughout Tunisia, Algeria, and Morocco during CMT fieldwork seasons highlight a different, more sentimental, dimension of photographic documentation found within our collections. While the Margaret Alexander collection also houses hundreds of museum souvenir postcards (depicting mosaics, naturally!), there are few examples of travel documents, ephemera, or mementos that retrace her movements through the region over time. Such incidental, or one could even say “personal,” materials may not be crucial to the study of this collection. But, her photographs do paint a vividly larger picture of the spaces, and moments, between and surrounding the actual fieldwork. At the very least, the images provide a wisp of Mediterranean sea breeze and warm rays of sun that ease the eyes amidst the pixel-like plethora of mosaic patterns. 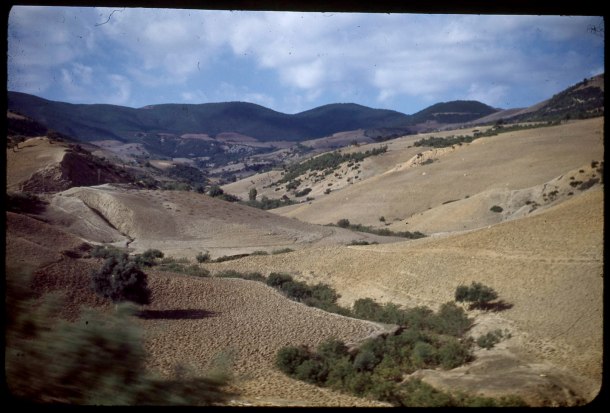 Many of the slides are already categorized as “mosaic,” “sculpture,” or “architecture,” and specify a location, and sometimes a date. But, a significant portion are either labeled simply as “views” or “miscellaneous.” This led me on a scavenger hunt to locate and identify place names and landmarks with the help of travel books and online guides. Unfortunately, without the visual cue of a minaret, dome, or citadel that populate so many of the frames, some landscapes and structures remain unidentified. 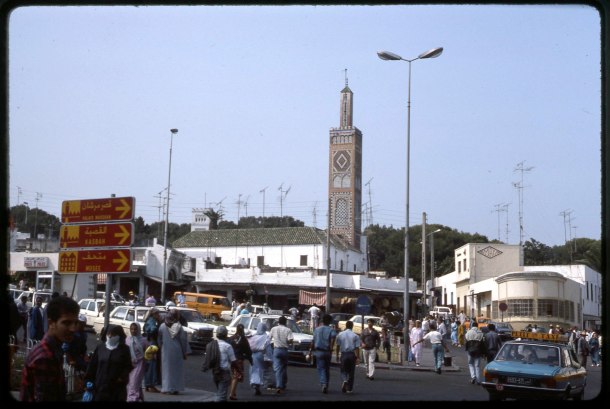 Minaret of Tangier Great Mosque, near Grand Socco, Tangier, Morocco, dated October 1988 (BF.S.2006.0097). This former market square is the entrance to the medina and where taxi rides must end as the roads narrow and bend.

Sufi patron saint Sidi Bou Makhlouf mausoleum and cultural center in background, El Kef, Tunisia, undated (BF.S.2002.4462). El Kef was the capital of Tunisia during the Second World War, and also served as the command center for the Front de Libération Nationale during the Algerian War of Independence.

Market, Bir Bou Rekba, Tunisia, undated (BF.S.2002.2651). Alexander probably passed though this small town on her way to, or from, Hammamet, the first tourist destination in Tunisia, known for its beaches and citrus groves.

Relief door frame, location unknown in Algeria, dated August 1980 (BF.S.2006.0106). One of the many painted blue doors and facades photographed by Alexander.

Alexander and her husband Robert, a historian of Hittite culture, captured their combined interests in relief stone sculpture and tomb motifs in a significant amount of documentation of tombs, cemeteries, and memorial decoration throughout the area of the Carthaginian empire. Carthage was inhabited by Phoenicians and their descendants the Punics, who ruled and resided there from the 9th to 2nd centuries BC. Characteristic of Punic monument sculpture, and typically made of limestone, carved stelae are placed on top of buried urns, which most likely housed the remains of human sacrifices, offered to the divinities Tanit and Baal Hammon. The Punic style of stele design and decoration is recognizable by its pointed shape and the common depiction of the goddess Tanit, who was associated with the cult of fertility. She was believed to be the personification of both the sun and the moon and was often depicted by a crescent moon turned upside down and joined onto the disc of the sun. At the site of Kerkouane, a 4th to 2nd century BC Punic town controlled by Carthage, there is an intact mosaic depicting Tanit in the stylized form of a circle and triangle. The layout of the town has been well-preserved ever since its abandonment after the second Punic War against the Romans, and archaeological finds point to the production of purple Tyrian dye as the basis of the inhabitants’ prosperity at the time. 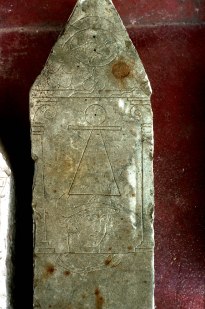 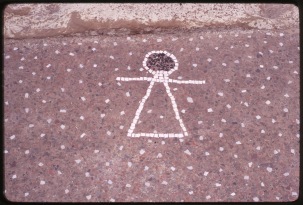 The collection is studded with images attesting to the variety, and similarities, of architectural styles and urban planning throughout time, and the numerous cultures that have converged in the Maghreb who have adapted to its environmental and topographical conditions, as well as socio-economic changes. It is easy to see what has inspired so many authors and artists upon their journeys along the North African coast, and not to mention, archaeologists and historians. 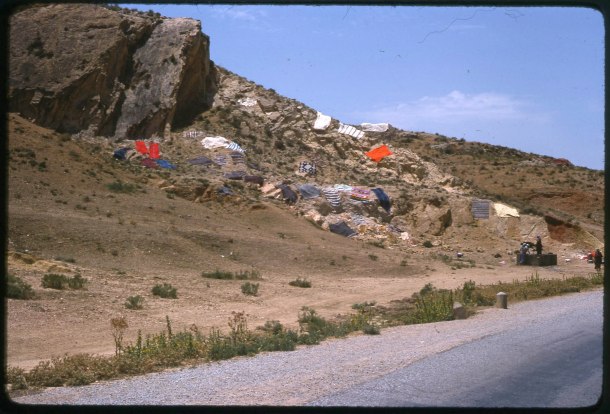 2 thoughts on “In-between mosaics: Getting to know North Africa”

Florence Declaration - – Recommendations for the Preservation of Analogue Photo Archives