Earlier this year the skyline and citizens of Aleppo lost the minaret of the Great Umayyad Mosque in the ancient walled city, destroyed amidst violent clashes. Many historic monuments, structures, and archaeological sites within the borders of Syria have undergone looting, vandalism, unauthorized excavation or construction, and varying degrees of damage in the crossfire of civil war. While much of the national heritage in the form of museum artifacts, documents, and manuscripts have been transferred to secure storehouses, the Directorate-General of Antiquities and Museums (DGAM) continues to report on the status of other Syrian antiquities, available on the Ministry of Culture’s DGAM website.

Great Umayyad Mosque of Aleppo with citadel in the background, with images of a sarcophagus and capitals within the citadel, photographs by Cyril Mango, 1971, from Site Book 41.

Since 1979, seventeen sites in Syria have been recognized by UNESCO’s World Heritage List, six of which are now on the List of World Heritage in Danger, as of June 20, including the Ancient City of Aleppo, where the Great Umayyad Mosque has become a devastated battlefield. Both UNESCO and ICCROM have hosted international workshops and e-learning courses for cultural heritage professionals about protecting cultural property during times of conflict and building the capacity for emergency response. This sharing of knowledge has spawned a Ministry of Culture campaign “Syria is My Homeland” to encourage citizens to participate in safeguarding Syrian heritage. The latest DGAM reports include cases where members of local communities have assisted in preventing theft and secret excavations.

The history of archaeological fieldwork in Syria has often been dominated by foreign institutions.  It wasn’t until after Syria gained independence in 1946 that national excavation missions began at sites like Palmyra, Bosra, Apamea, Saint Simeon, and Krak des Chevaliers. Larger, ambitious projects commenced in the late 1960s to document and excavate sites that were threatened in the Euphrates Valley, which would be inevitably flooded by the reservoir created by the new construction of the Tabqa Dam. In 1971, the Syrian Department of Antiquities invited a survey team from the Dumbarton Oaks Center for Byzantine Studies and the University of Michigan’s Kelsey Museum of Archaeology to examine this region and to choose a potential excavation site. The survey team, led by Professors Cyril Mango and George Mendenhall, selected Dibsi Faraj as a suitable and promising site for a three-year archaeological investigation, focusing on structures dating from the third to sixth-centuries – though there is evidence of domestic occupation from the first to the tenth centuries. All field activities were directed by Richard P. Harper of the British Archaeological Institute at Ankara, who reported on the fieldwork in the Dumbarton Oaks Papers. Detailed site descriptions, excavation notes, and correspondence regarding the planning and progress of the project, are held in the Byzantine Institute and Dumbarton Oaks Fieldwork Records and Papers archival collection in ICFA.

Today, the site of Dibsi Faraj is submerged in Lake Assad, Syria’s largest lake, which provides drinking water to Aleppo, irrigation to surrounding areas, and has helped develop diverse ecosystems. While the physical site is no longer accessible, some of the survey photographs taken between 1971 and 1973 are viewable, documenting Dibsi Faraj, as well as many other sites throughout the country. The photographs, now compiled in four of our Site Book binders, and also represented in our printed Photograph Collection, are a small attestation to the vast richness and diversity of Syria’s cultural heritage. Also included in the Site Book binders are copies of albumen photographs from the Palestine Exploration Society expedition in 1875, acquired from the Princeton Theological Seminary by print exchange, documenting many of the same sites.

Bosra, sections of a panoramic view by Tancrède Dumas, 1875 (Palestine Exploration Society), from Site Book 41. Images acquired from the Princeton Theological Seminary by print exchange in 1973. 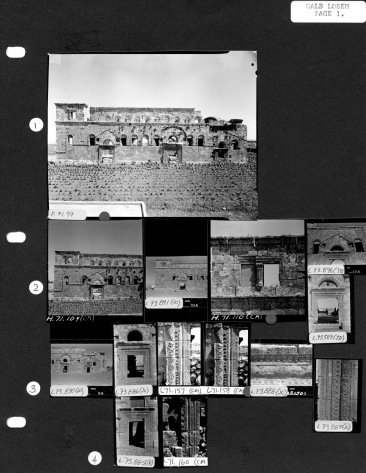 Many institutions, such as the University of Copenhagen are collecting data about endangered and damaged archaeological sites in Syria in order to assist in future research and restoration of what remains. From their Faculty of Humanities:

“Syrian heritage is an integral part of worldwide heritage, and when Syrian academics and authorities protect and promote it they do so on the assumption that this heritage is not owned by the Syrians only, but by all humankind. These sites are repositories of global knowledge, and any damage or loss is a loss to the history of humankind and our collective memory… In terms of the Syrian conflict, heritage will play an important role in the recovery phase, since it represents the common background on which all the Syrian factions will converge during any process of reconciliation.”

The concern for the protection and survival of humanist values in a world of unforeseeable events is also expressed in the words inscribed in stone here at the Dumbarton Oaks Research Library and Collection, a quote by its co-founder, Mildred Bliss:

“Those responsible for scholarship should remember that the humanities cannot be fostered by confusing instruction with education, that it was my husband’s as well as it is my wish that the Mediterranean interpretation of the humanist disciplines shall predominate…” 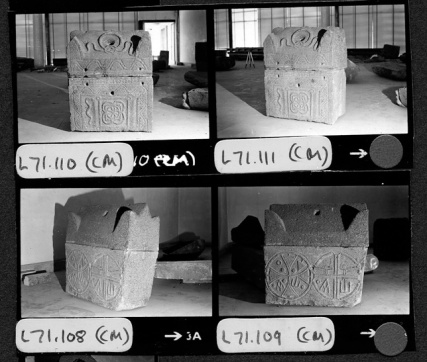 5 thoughts on “Protecting the Monuments of Syria”

Florence Declaration - – Recommendations for the Preservation of Analogue Photo Archives